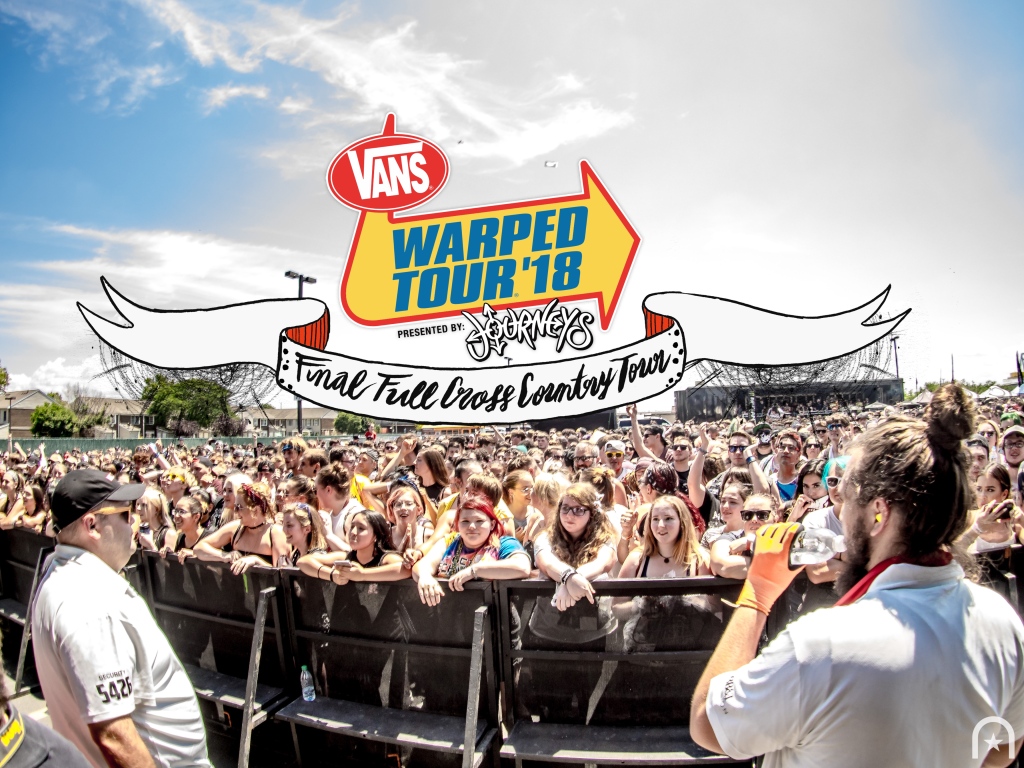 For the last 24yrs, the Vans Warped Tour has been been the largest traveling music festival in the United States plus the longest-running touring music festival in North America. Criss-crossing through the US (and the occasional parts of the UK and Australia), It’s been nicknamed the “punk rock summer camp” for veteran bands and those trying to making a name for themselves. The tour is not one for the weak willed. The grueling Summer heat, the traveling, vehicle breakdowns, an ever changing daily schedule, and time away from loved ones would push those to their limits. But for a lot kids (and young adults like me), this tour was a place where you can be yourself and be one with your tribe.

This year would be considered the final cross-country run of the Vans Warped Tour. Despite what everyone else keeps thinking, the TOURING part is over but not the festival. Who knows what the future may hold for this Summertime staple.

As I made my way through the production halls of the BB&T Pavilion in Camden NJ, a moment of melancholy loomed over me. This is the last time I’ll be getting lost in these halls for Warped. All of the friends I have made over the years in production I might never see again after this. After a moment of clarity, I pushed onward and met up with my writer for my shot list. (NOTE: I was originally collaborating with another outlet but a lot of the interviews that were originally approved ended up being cancelled that morning so I decided to share the coverage here instead.)

One of the first groups I shot was Tonight Alive. Us here at neostar//media have had a long history with with the band. Some of our first Warped interviews were with various members as they were on the rise. It’s still phenomenal to see how far their careers have soared over the years and they’ve always made time to hang out and talk to us whenever we’d run into each other at shows. This was their 4th time on the tour.

The next group I saw was Nekrogoblikon. There’s been a buzz over the last few months about this band. The crowds were too massive for me to fight my way through so I hopped up on the Monster Energy truck to try and catch a wide shot. This was their first ever run on the Vans Warped Tour.

Next, I made my way through to catch Wage War. I believe they were on the previous year but I never got a chance to see them until I caught their set during the Self Help Fest last September. Their album ‘Deadweight’ was hands down one of my favorite records of last year. This was also their 2nd Warped Tour run.

Next up was Four Years Strong. I wasn’t sure what to expect from FYS this summer. Probably a “hits” show since they’ve just released an acoustic record earlier this year Some of You Will Like This, Some of You Won’t so figured they’d just stick with fan-favorites (which they did.) This is their 6th year playing the Vans Warped Tour.

The buzz around Crown the Empire has been the departure of co-vocalist Dave Escamilla with Andy Leo taking over full vocal duties. You can tell that there was just “something” missing from their performance but over all, I think Andy did a great job. It was almost impossible to get a still shot of him as he kept jumping around on stage. This was their 4th time on the Vans Warped Tour.

Another Australian band that has been making waves this summer was The Amity Affliction. The band has been gearing up to release the sixth studio album, ‘Misery’. This was also their 3rd time on the Vans Warped Tour.

Playing their 12th run on the Vans Warped Tour, the Canadian pop-punk band Simple Plan was also celebrating their 20th anniversary as well.

Falling In Reverse are no strangers to the Vans Warped Tour. This will be their 6th time returning to the tour.

I don’t know what else there is to say about Every Time I Die that hasn’t been said a million times before. They have become a Warped Tour staple over the years, they put on one of the best live shows, and their albums are phenomenal. This is Every Time I Die’s 9th run on the tour.

Hatebreed was a “special guest” on two of the East Coast dates of Vans Warped Tour. Today in Camden, NJ and tomorrow at Holmdel, NJ. In the previous year when I tried to photograph them, but a massive thunderstorm erupted over the skies above us causing us to seek shelter. This year, I finally get redemption. Within the first note, they did not let up. They tore right into old school fan-favorites. The majority of their set leaned more on the hardcore side of their catalog. This is the band’s 3rd time on the Vans Warped Tour.

Earlier this year, Senses Fail released their seventh album titled ‘If There is Light, It Will Find You.’ It was a deeply nostalgic and personal record written by vocalist and sole original member Buddy Nelson. The entire record harkens back to the sing-along feels of their landmark album ‘Let It Enfold You.’ But being around the same age as the singer, a lot of the songs on the new record felt uncomfortably too relatable. From growing up and getting older, dealing with the loss of close ones, and having kids. Just a few songs in, Buddy dedicates the song “Elevator to the Gallows” to his daughter Penelope (seen in the bottom corner along with his wife.) The main highlight of their set was the Nu Metal mashup of System Of A Down’s “Chop Suey”, Drowning Pool’s “Bodies”, Limp Bizkit’s “Break stuff” and Rage Against The Machine’s “Bulls On Parade” towards the end. This was their 6th year on the Vans Warped Tour.

We’re getting closer to the end now. Closing the Monster Energy White Lightning stage today is our very own Motionless In White. With the recent departure of  longtime bassist Devin “Ghost” Sola, they called in the help of the group’s former guitarist, TJ Bell to fill in for the duration of the tour. This is also the band’s 10th run on the Vans Warped Tour.

Now officially finishing the night is Twiztid. I didn’t know what to expect from them. I’ve heard of them and have had friends been fans of them over the years but I knew absolutely nothing about them. But, their stage presence was a pleasant surprise. They came out onstage with a live drummer to be honest, hearing the clean drums with a backing track was a nice relief to the ears after eight straight hours of punishing breakdowns.

So as sad it is that the tour is over. I try NOT to dwell too much on it. In the last two decades, I’ve felt that I have found an identity associated with the tour and the music it encompasses. I have watched as bands begin from playing small stages to filling arenas to becoming household names, from touring in broken down vans to becoming icons. The tour might be over but the music isn’t. If anything, it just opens up doors for others to start their own movement. Summers won’t be the same again after this but in the end, the music will continue.

Words and Photos by: Henry Chung