This exclusive poster will be available for our #Halloween Show this Saturday at @sandseventcenter in Bethlehem, PA! Get your tickets now so you don't miss out. [link in bio] #NFGYC

Halloween tends to bring the weirdness out in people. That’s just what we got from both audience and performers in Bethlehem’s Sands Event Center on Halloween Night.

THE TRUTH IS OUT THERE 👽🐸

Scranton’s own Tigers Jaw came out with constant members Ben Walsh and Brianna Collins dressed as ‘The X-Files’ Mulder and Scully while their bandmates joined them as two aliens and one Kermit the Frog. Given the opening slot, they kept the song selection upbeat and uptempo, drawing on their excellent 2014 release ‘Charmer’ along with some old favorites. As noted in a previous observation, the band has seemed to get tighter with the streamlining of their lineup. 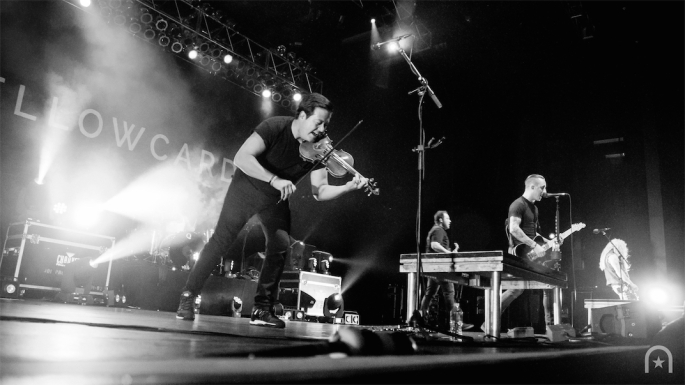 Warped Tour staple Yellowcard changed things up a little bit at times as Key turned ‘Empty Apartment’ into a solo keyboard performance. Throughout the set, guitarist Ryan Mendez shined particularly brightly with his ringing lead guitar came across more prominently than previous instances of seeing the band performing outdoors. After touring heavily on their latest album ‘Lift a Sail’, they offered up a pair from that release, ‘Make Me So’ and ‘Crash the Gates’. Toward the end of the set, Key said the band would be taking a little time off to start writing for their next record. Of course, they ended with ‘Ocean Avenue’ which was a fitting way to close out their set.

As New Found Glory took the stage, one had to wonder how the band would sound as a relatively new four piece. Their album ‘Resurrection’ came out a year ago with the re-release coming out a few weeks prior to this show, which proved that the band could still thrive in the studio. The true test was seeing the band live to see if they still had a full sound.

All is well, folks. NFG, despite the changes, still had plenty of power. Starting things off with ‘Resurrection’, they ran though a bunch of classics ‘Hit and Miss’, ‘Understatement’ and ‘Sonny’.

Brianna Collins from Tigers Jaw joined the band for ‘Ready and Willing’. The band spotted an audience member dressed as Easy-E, invited him onstage and let him make a request (‘Tip of the Iceberg’) and sing along with them. One of the highlights was a Stay Puft Marshmallow (wo)Man that came out and sang ‘Vicious Love’ with the band. This masked person sounded suspiciously like Hayley Williams of Paramore who was on the recorded version. Hmmm…

The main set ended with ‘The Story So Far’. We all knew that couldn’t be it, especially after seeing the band’s social network accounts earlier in the day. Things really got interesting as the band re-emerged dressed in Metallica-inspired attire. They launched into a fairly faithful version of ‘Enter Sandman’. As most of their shows do, they got to ‘My Friends Over You’. As an odd coda, they brought Yellowcard’s Ryan Key out to go through ‘Enter Sandman’ again as confetti rained down. 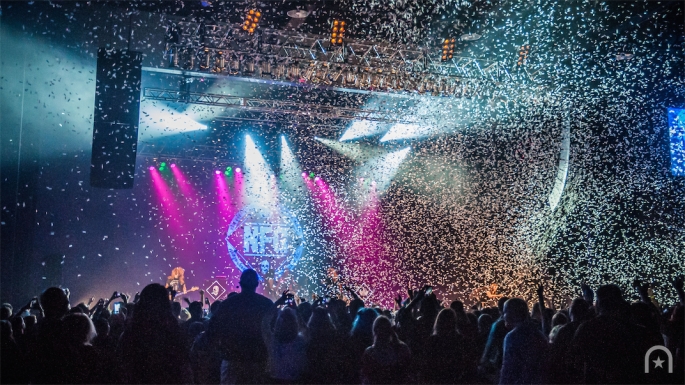 A big theme of the evening was gratitude. The bands thanked the audience repeatedly not only for being in attendance, not only for deciding to spend Halloween with them, but in the case of Yellowcard and New Found Glory, allowing them to exist as long as they have.

All in all, with Trick or Treating far in my rearview mirror, it was the best possible way this reviewer could have spent his Halloween.

Pick up Tigers Jaw’s Charmer on iTunes HERE or on Amazon HERE.

Pick up Yellowcard’s Lift a Sail album on iTunes HERE or on Amazon HERE. 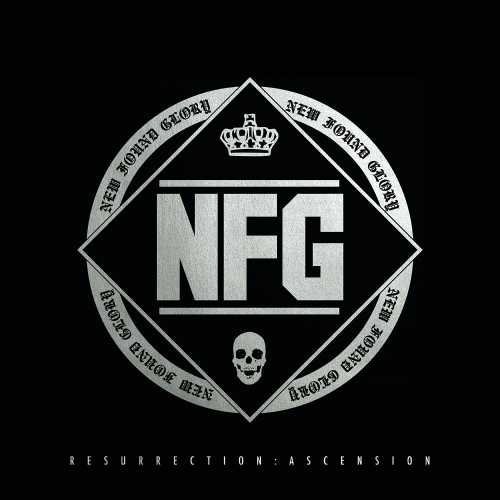