FRIDAY, MAY 15TH – Bethlehem’s Sands Event Center was a stop on The Missing Link tour, a co-headlining event featuring Clutch and Mastodon.

The evening began with Graveyard bringing their blues-influenced rock. Even though they are from Sweden, they have much of the genre’s aesthetic down pat, looking very much as though they could have been transported from the 70s. Fortunately the songs and the performance held up with copious leads and particularly furious drumming. A new song was even shared. Despite their contrast from the rest of the bill, they seemed to go over very well.

Mastodon then took the stage and their set drew heavily on their most recent album, Once More ‘Round the Sun. “Tread Lightly” started things off and of course the singles (“Chimes At Midnight” and “High Road”) were included in the set, but the surprises came from how deeply the went into the album, including two of my personal favorites “Ember City” and “Halloween”. Two tracks were included from each of their other albums except for Remission which was ignored entirely. This is understandable as their discography has grown to be rather formidable and one can reasonably assume that most of their fans have come since the early days. In a pleasantly surprising move, the set was concluded with the 11-minute track “The Czar” from Crack the Skye. 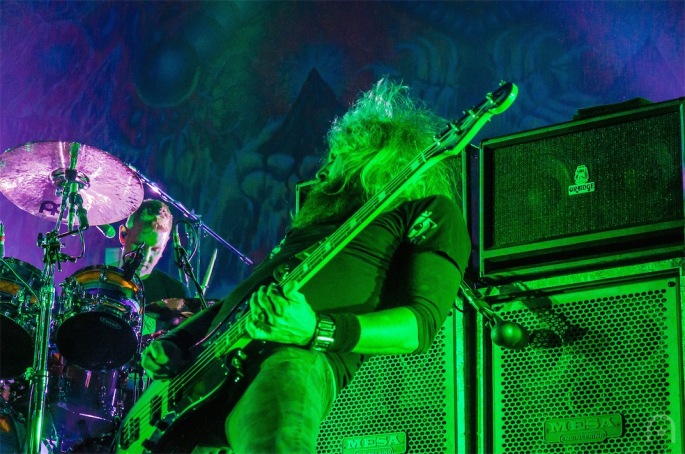 At this point, Mastodon has shown that they can do whatever they want in a live show. They have enough hits to keep the audience happy as well as enough deep cuts to draw upon to keep things interesting, like playing their Blood Mountain instrumental, “Bladecatcher” as they did on this evening.

As one of the biggest bands in rock and with a suitably large stage show, Mastodon would seem like the obvious band to end the evening. Not so on a co-headlining tour where the bands take turns.

Before the final act of the night took the stage, there was clearly some shifting of audiences as those who were there to see Mastodon receded away from the stage and those there to see Clutch surged forward.

Being new to seeing a Clutch show in person, it was impressive to see how simple the stage setup was: a few modest but mighty amps, no smoke machines or light shows, just plug in and play. Despite the lack of superficial accompaniments, the band came out to a roaring crowd’s approval and owned the stage. They have existed for 25 years for a reason, after all. Bars and small clubs may have helped to make Clutch what they are today, but they show that approach can work in much larger venues.

Their set included a few highlights from 2013’s magnificent Earth Rocker . Many of the rest of the songs were recognized by this extremely casual fan. It was pointed out that 2015 marks the 20th anniversary of their self-titled second album so they included a group of songs from that offering. Those in attendance were treated two tracks off of the upcoming album, Psychic Warfare. As has been hinted at during interviews, they seemed to be building off of the more straightforward rock that they had found success with on Earth Rocker.

Even the group’s bluesier tendencies which doesn’t always work for this review are easier to appreciate in the context of a live setting. There isn’t a weak link in their chain and if you think of singer Neil Fallon as mad preacher fronting a blues-rock band, it all starts to make a little more sense.

Earlier in the day, I had the pleasure of speaking with Mastodon’s drummer, Brann Dailor. We covered a little about their history in the Lehigh Valley, how the band has evolved and where they might be going, music videos, side projects, the Atlanta music scene and….well, just listen.

Pick up Once More ‘Round The Sun here!