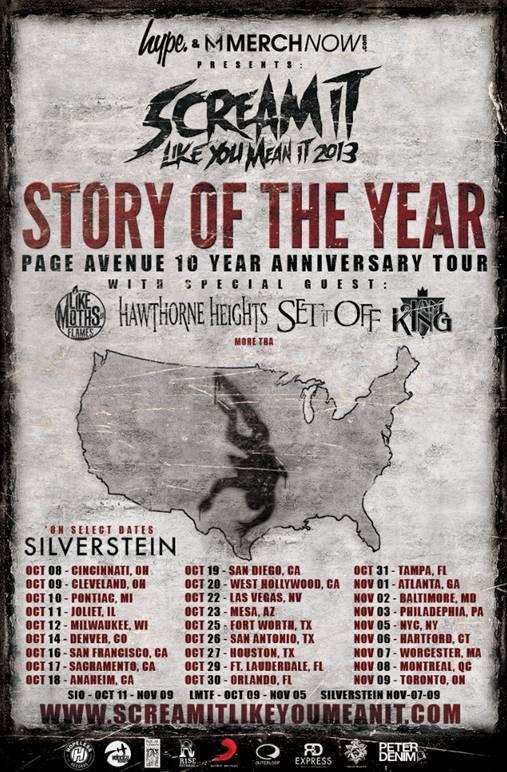 Story of the Year will be playing their classic album, Page Avenue, in full, from front to back,as headliner on the 2013 Scream It Like You Mean It Tour. The trek marks the 10 year anniversary of the St Louis rockers’ major-label debut, which served to introduce the band to the masses, via its two rock radio hits, “Until the Day I Die” and “Anthem of Our Dying Day“.

Also confirmed for this year’s tour is Like Moths to Flames, Hawthorne Heights, Set It Off, I Am King, and Silverstein (on select dates).

In referencing the band’s stint on the popular annual package tour, Story of the Year front man Dan Masala says, “I don’t scream often, but when I do, I mean it.” In regards to the 10-year anniversary of the band’s breakthrough release, and the stretch of road in St Louis that the album is named after, Marsala says, “Page Avenue is a great album, but a pretty shitty street.”

Scream it Like You Mean It co-founder Matthew Stewart says, “We are very excited to be bringing the most memorable and SILYMI tour to date.”

VIP SILYMI packages, including special acoustic performances by SOTY, meet and greet signings with each band on the tour, and more are on sale now and going fast at: www.screamitlikeyoumeanit.com.