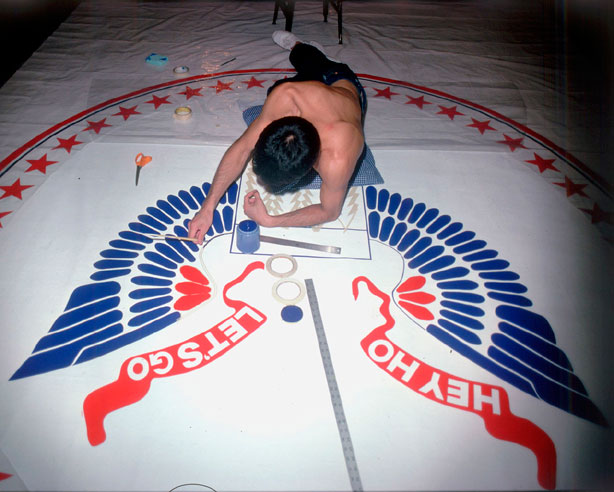 Arturo Vega, one of the most influential visual artists in punk rock — as the designer of the Ramones iconic and much-copied logo, and artistic director for the band for their entire history — passed away in New York City aged 65 on Saturday, June 8th.

Vega, who grew up in Chihuahua, Mexico, before moving to the U.S. in the 70s, created the “Hey Ho Let’s Go” seal that has adorned Ramones merchandise for decades. He served as the band’s artistic director and, in later years, their archivist and historian. He was also an early source of support for the band. Vega befriended the musicians and let Joey and Dee Dee Ramone live in his loft on the Bowery near CBGB prior to the release of their first album.

The T-shirts featured Mr. Vega’s striking logo for the band: an eagle resembling the one on the presidential seal, except that one talon held an apple tree branch instead of an olive branch — “the Ramones were as American as apple pie,” Mr. Vega said — and the other held a baseball bat instead of arrows, because Johnny Ramone, the lead guitarist, loved baseball. The band members’ first names circled the symbol.

He completed his most recent project in March: a mural on Elizabeth Street featuring an image of Jesus and the words “Life isn’t tragic, love is just being ignored,” lyrics from a song by the Bronx, a punk and mariachi band.

Mr. Vega lived in his East Second Street loft for the rest of his life. In 2003, two years after Joey Ramone died of cancer, Mr. Vega played a role in having city officials erect a sign declaring East Second Street at the Bowery “Joey Ramone Place.” He said at the time that even as the Ramones had been enshrined in the Rock and Roll Hall of Fame and embraced as civic symbols, they would forever be rebels.

“They never sold out,” he said. “No matter how hard we tried.”