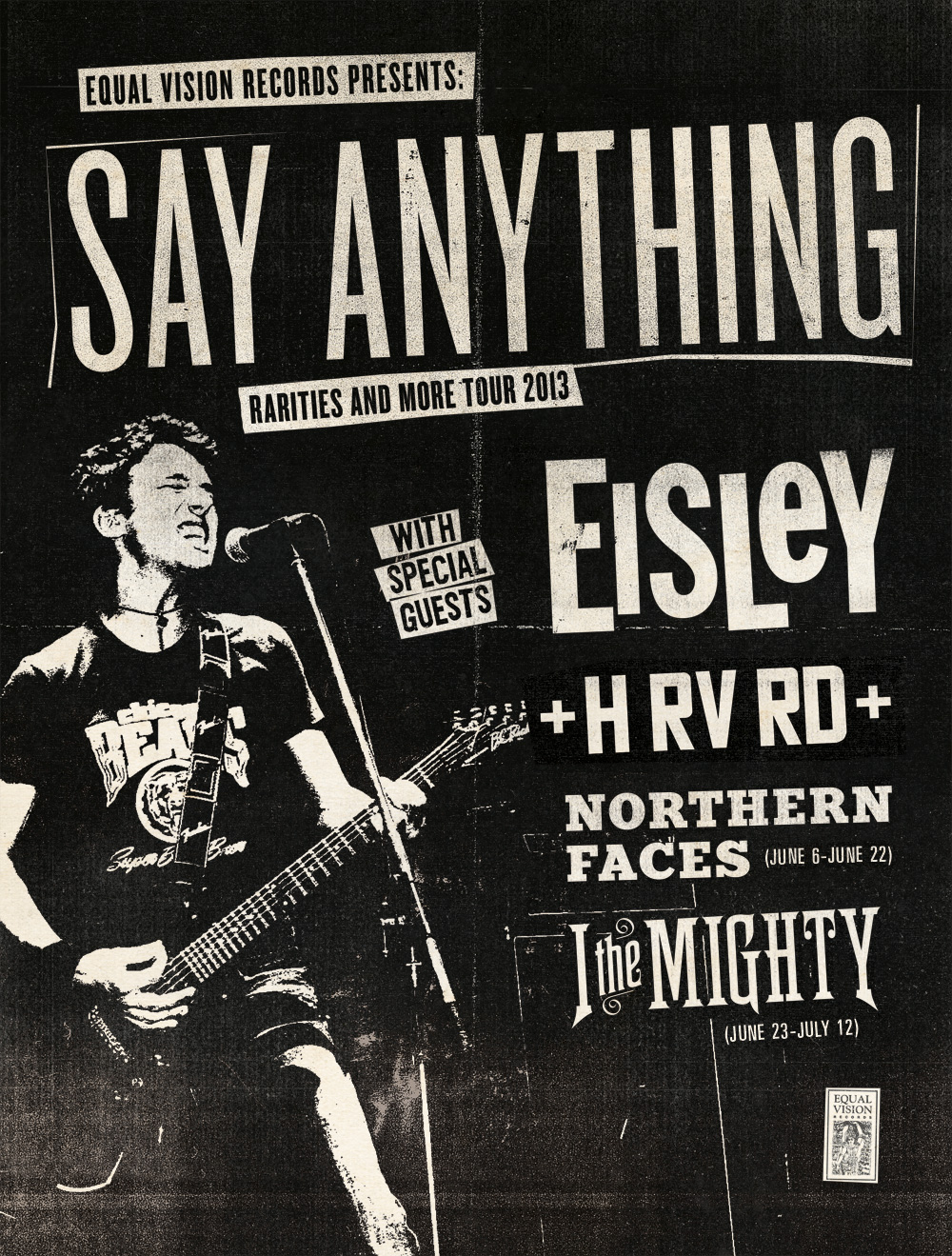 Say Anything will headline the six week tour, with support from Eisley, HRVRD, Northern Faces ( June 6 – June 22) and I the Mighty (June 23 – July 12). The lineup, which exclusively features Equal Vision Records’ artists, will kick off the tour on June 6 in Dallas, TX.

Say Anything released their highly anticipated, three-disc collection of remastered B-sides and rarities: All My Friends Are Enemies: Early Rarities, earlier this year on January 22. Before there was …Is A Real Boy, In Defense of the Genre, Say Anything, and their latest full-length album – Anarchy, My Dear, there was Baseball, Menorah/Majora, and Junior Varsity. These early recordings were the start of Say Anything’s prolific, decade-plus long career, during which they’ve toured the world and sold nearly 500,000 albums.

The upcoming summer tour will showcase many of the rarities songs, including some that have never been performed live before, as well as select fan favorites off of each of the band’s studio releases.

Eisley will perform as direct support to Say Anything and will be touring in support of Currents, their forthcoming full-length album that will be out May 28. The album was self-recorded and self-produced in their home studio in Tyler, TX – the band’s first time recording completely independently – and sees Eisley’s signature tapestry of rich harmonies, delicately woven over the band’s most intricate instrumentations yet. Currents is the band’s follow-up to their Equal Vision debut The Valley, released in 2011 and a five track EP, Deep Space, released in 2012.

HRVRD, fresh off of the release of their sophomore full-length album From The Bird’s Cage, will precede Eisley on the tour. The band has received rave reviews of their new album, impressively performed four times in two days at SXSW 2013, and has toured nearly non-stop in the past year, sharing stages with the likes of The Dear Hunter, Fun., Russian Circles, letlive. and more, along the way.

Splitting the opening slot on the tour will be Equal Vision newcomers Northern Faces, who just released their debut EP Southern Places on March 5, and San Francisco’s I the Mighty who is set to release a new full-length record this summer. Northern Faces will perform on the first half of the tour from June 6 to June 22, and I the Mighty will perform from June 23 to July 12. Tickets will go on sale to the public on Thursday, April 11 at 12PM local time. Ducat King presale tickets are available today (12PM local time) at sayanything.ducatking.com. Tour dates can be found below.