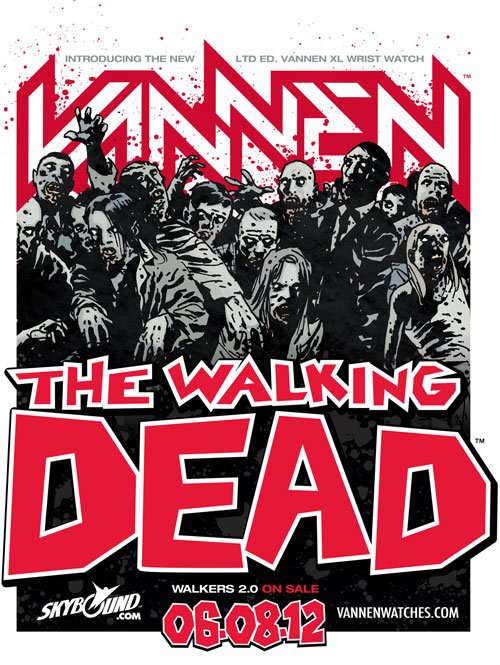 Robert Kirkman, writer/creator of Skybound’s Eisner-winning “The Walking Dead” comics and best-selling graphic novels, have partnered again with Vannen Watches to release Walkers 2.0, their second collaborative wristwatch. This special edition timepiece, available on Friday, June 8th, 2012, features even bloodier artwork from Charlie Adlard. Each day leading up the release date, Vannen and Skybound will unleash more info and photos on this deadly collectible. Stay up to date by following them both at the links below.

About Robert Kirkman: Robert Kirkman’s success and passionate advocacy for creator-owned comics led him to become the first person invited to become a partner at Image Comics since the company’s inception twenty years ago and he formed his own imprint there, Skybound, in 2010. Kirkman is the creator/writer of the Eisner Award-winning The Walking Dead, long-running Invincible, all-ages Super Dinosaur, The Astounding Wolf-Man, and new title Thief of Thieves, among many others. Kirkman has earned the respect of the comic, writing and television communities and topped the New York Timesbestseller list for graphic novels in 2011 and in April 2012, he took the top five spots on both the hardcover and paperback lists. He’s the creator/executive producer and writer of the hit television show, AMC’s The Walking Dead, the highest-rated basic cable drama of all time in the U.S, also an international success in 120 countries and 250 million households. AMC just picked up Thief of Thieves as a series with Kirkman serving as creator/executive producer and writer. Skybound.com is your destination for all news and merchandise for Robert Kirkman, The Walking Deadand all Skybound titles.