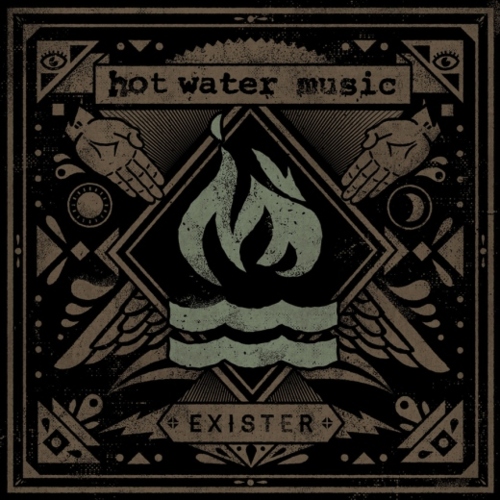 The last time we heard from legendary Gainesville, Florida punk band Hot Water Music, it was 2004’s New What Next. Since then, each member has been involved in different musical projects, some solo and some as part of other established groups. No matter their paths, there was always a sense that there was some unfinished business with their original project.

Hot Water Music eventually reformed and has been playing shows for the last year or two, but Exister officially adds 13 songs to their already impressive canon. Production courtesy of Bill Stevenson and Jason Livermore in the Blasting Room, gives the band their most produced offering yet. This doesn’t mean that the music has softened, things have just gotten a little glossier and catchier. The elements that you have come to love about the band are all present: driving basslines, dueling vocals, complex drumming, and winding guitars.

“Mainline” starts things off with a bang and right off the bat, it’s plain to hear that Chuck Ragan’s vocals have never sounded better. Chris Wollard has some of the catchiest songs on the entire album (“Safety” and “Wrong Way”) though some of his vocals seem a little buried in the mix. He also has a song late in the album “No End Left In Sight” that is a sluggish crawl and different from anything else the band has attempted before. This innovation isn’t entirely successful, though and is the album’s low-point.

Fortunately, Exister covers a lot of ground and no two songs are too similar. “Pledge Wore Thin” is as rousing a chorus as you could hope for while closer “Paid In Full” ends things on an energetic, upbeat note. First single “Drag My Body” might not have grabbed you when presented by itself, but for some reason, it sounds more at home when taken in the context of the whole collection.

This is a surprisingly consistent album, especially after repeat listens. The first time through might give you the impression that it is merely very good, but little details emerge as you revisit it.

Flight & Crash, Caution and maybe even No Division may be their definitive works (though many will cling to early their release Fuel for the Hate Game) but Exister is an incredible resurrection. In many ways, the band has never sounded tighter and it seems like the future of Hot Water Music is rosy.