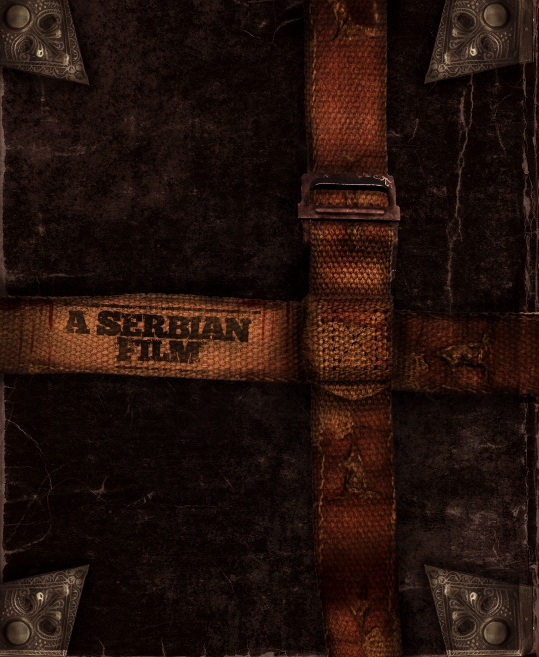 ‘A Serbian Film’ is the first movie I’ve ever seen that made me feel like I should just keep it to myself and not mention it to anyone else; just pretend it didn’t happen. This movie is ugly, evil, sick and repulsive. It’s also a brilliant and terrifying horror masterpiece. The problem is that once you watch it, you can’t un-watch it.

‘A Serbian Film’ is the first feature film by director and co-writer Srđan Spasojević. Judging from his first offering, he’s going to have watchful eyes on him- not just those of select audiences and critics, but probably the eyes of law enforcement as well. Its reception has fallen mostly into only two categories: hate it or love it. Most hate it. The film has been banned in several countries for its content and an investigation has been opened on the filmmaker to find out if the film is in violation of the law. There are several scenes involving rape and sexual assault as well as sexual abuse of a minor. Spasojević has stated in several interviews that ‘A Serbian Film’ was a metaphorical assault on the government of Syria and the oppression the country has faced in its past. Although I doubt most will find that subtext buried within the movie, there is something very engaging here that goes beyond simple shocks and vulgarity.

The plot is simple enough. Milos is a retired porn star who has settled into his life-long role of husband and father, but after being out of work for years, he’s left to figure out what he can do to support his wife and child. He soon meets Vulkmir, an eccentric artist with a passion for creating something special unlike anything anyone has ever seen. He offers Milos a sum that will guarantee comfort for the rest of his family’s life if he’ll agree to be the star of Vulkmir’s film. The only catch is that Milos cannot know the script in advance and must instead take direction from a small earphone placed on him. He will do as he is directed, and the cameras will capture it. It won’t take a genius to figure out very early on that Vulkmir has sinister intentions, and I found him to be one of the greatest cinematic villains of the past decade. Of course the star is hesitant but the offer is far too good to pass up and it’s not long before the cameras roll on Milos. When the scenes and situations shift from simply bizarre to sexual depravity unlike anything Milos has previously filmed, he begins to question his decision. From that point on, things get much, much worse.

There is an impending sense of dread throughout the entire movie and that can only be attributed to the excellent direction. The story and its progression was very interesting albeit horrifying, and the acting was very impressive. There wasn’t a moment when the film didn’t feel believable, and you’ll probably end up wishing for a scene or two that doesn’t look so convincing. A gritty, stark contrast to the picture makes you feel like you were watching something you weren’t supposed to. In fact, the movie wastes no time in assaulting your senses when you’re thrust right into a scene out of one of Milos’ pornos- only to find out his son is watching it himself. The harsh visual tones are perfectly paired with the music, something that can often make or break a film. The soundtrack was fantastic, using an even-handed mix of unsettling piano work as well industrial claps and rhythms that served to further nail the imagery into your mind.

‘A Serbian Film’ is the most brutal, unflinching film (with a cohesive narrative) that I have ever seen. Should I tell you to watch it? No. Now I realize that’s in odd contrast to my five-star score but keep in mind that I’m scoring it this way because I believe that it is a great film. The problem with it is that it’s just not for most people. This movie was not tailored for your average horror-lover or gore-hound. I can’t say who this movie was made for, but it worked so well for me because it engaged me. It’s as though the filmmaker held a gun to my head during the whole running time, and I couldn’t look away even if I sometimes wanted to. If you can watch this and be mature enough to take it at face value, and aren’t easily offended, then I say give this movie a chance. Good luck forgetting it though. Something wicked this way comes…

EJ Sam – Who is a contributing writer for Neostar Promotions. When he is not slaving away for the corporate machine, EJ is busy working on his screen-play.