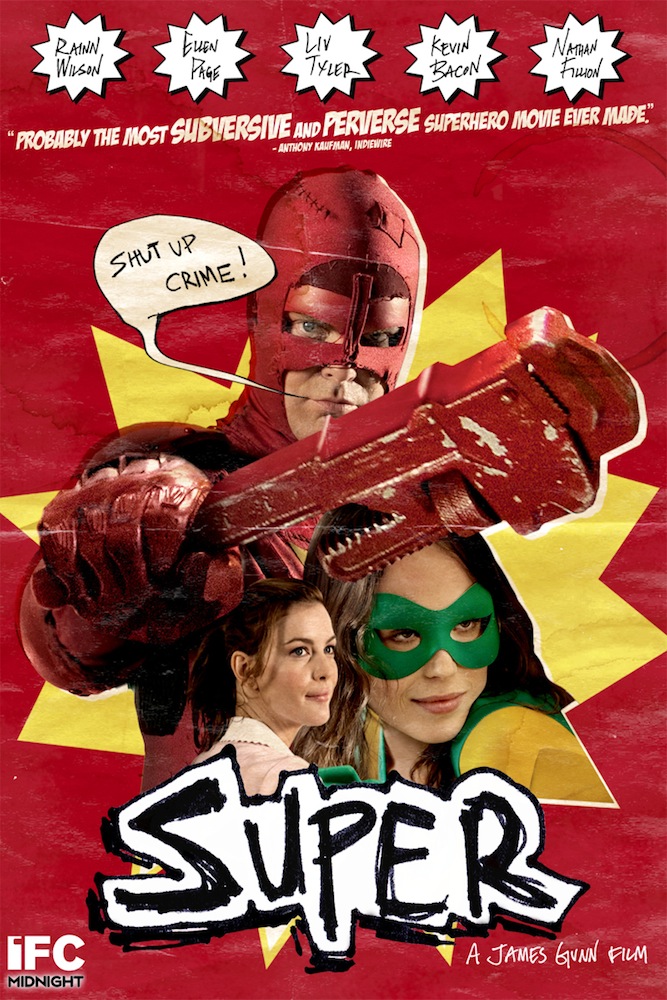 In the last few years, there has been a surplus of movies that deal with nerds who become super power-free superheroes. Actually, that’s being generous. They’re really just masked vigilantes. Either way, the latest action comedy to cover that territory is writer/director James Gunn’s ‘Super.’

Frank D’Arbo (Rain Wilson) is a short order cook whose recovering addict wife Sarah (Liv Tyler) has left him to be with drug-dealing club owner Jacques (Kevin Bacon). Understandably, this depresses the heck out of him, until he has a vision (which he is prone to having) where he is touched by the hand of God. That, along with seeing the Christian-themed superhero The Holy Avenger (Nathan Fillion) inspires Frank to clean up the crime in his neighborhood. Donning a patchwork red suit, he goes by The Crimson Bolt attacking evildoers and rude people with a wrench to very mixed results.

As is often the case, law enforcement regards him as a menace to society, but a girl named Libby (Ellen Page) who works at the local comic book store is on to Frank and she wants in. She makes a suit, calls herself Boltie, and joins him despite his protests.

Are these two in over their heads? Will they clean up the streets? Will Frank be able to save Sarah from the dark world she has entered?

The story is comparable to ‘Kick Ass‘ only Frank has a lot more emotional baggage than that film’s hero. It’s also far less over-the-top and stylized. It aims to be a more accurate depiction of what would happen if someone tried to become a superhero. There can be serious consequences to that decision. Perhaps some of the approach had to do with the fact that this is a very low-budget independent film. To its credit, the financial constraints never negatively affect the story.

While most other superhero stories emphasize action, ‘Super’ bounces around wildly from comedy, to comic book, to very awkward comedy, to character study of a disturbed individual. There are a few moments in the film that are legitimately sad and affecting. These are offset by some laugh out loud moments which often give way to shocking displays of gory violence. The tone varies wildly as if to cover all of the possible bases a story like this can explore. Perhaps you’ll find it unwieldy, but this examiner felt that the variety made for an interesting ride.

It’s not perfect. There are some gaping plot holes that are tough to ignore. They mostly come from the lack of law enforcement throughout the story. A detective lurks around a little, but considering what Frank does, you would think the police would descend on him a lot harder and a lot faster than they do. Another problem involves a particular scene where dozens of people should be able to see and give a description of Frank with and without his costume. Considering what happens, you would think the police would get statements from witnesses. The ending offers satisfying (and fairly appropriate) closure to most of the conflicts but one major climactic development raises some obvious questions that will force you to just use your imagination.

Rainn Wilson is made for and experienced at playing a downtrodden character. That serves him well here as one of his character’s problems is that he has very little self-esteem. His sense of morality is sometimes warped and his visions are sometimes funny, sometimes nightmarish. The character is complicated and haunted, but thankfully finds himself in situations that are swimming in deadpan humor. Ellen Page has never played a character quite like Libby. Her hyperactive, bloodthirsty, foul-mouthed personality isn’t ideal for rational crime fighting but her character’s enthusiasm is very evident. She is really fun to watch. Actually, Frank and Libby together are an especially fun combination to watch. Kevin Bacon’s Jacques is mostly low-key but enjoys all the benefits of being a sociopath. His goons (led by Michael Rooker) do most of the heavy lifting. Poor Liv Tyler really doesn’t have a lot to do for most of the film except to be zonked out on drugs and to be in the company of Jacques.

Special features include: commentary, behind the scenes, a featurette at SXSW, the making of the main titles, a deleted scene, TV spot and a trailer.

‘Super’ isn’t going to satisfy your craving for non-stop action. There’s just enough of everything (laughs, action, drama) to make it all work. If you want to see a vigilante everyman superhero movie that is a little different, give it a try. It didn’t make much of an impact at the box office but ‘Super’ came out of almost nowhere to be one of this examiner’s favorite movies of 2011.

J.J. Ellis – When J.J. Ellis isn’t writing as the Allentown DVD Examiner, his Decent Exposure Radio can be heard on the air every Friday night from 10:30 to midnight (EST) on WXLV 90.3 FM or wxlvradio.com!

One thought on “DVD Review: ‘Super’”