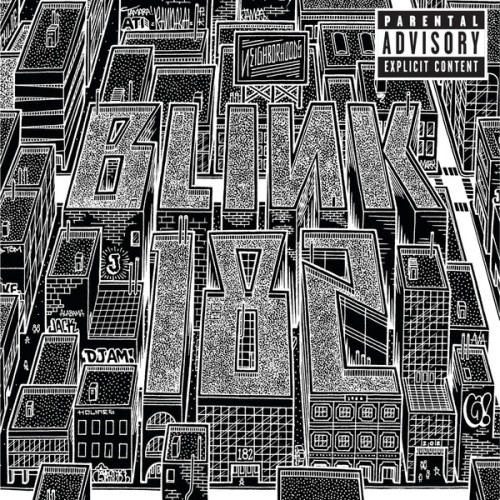 Blink-182 has been a constant source of inspiration for pop-punk bands since the mid 90’s, and with over 27 million records sold who wouldn’t want to imitate that formula.  Their new album, Neighborhoods brings a familiar sound, but not necessarily the ‘Blink-182’ sound that long time listeners were looking forward to.

Their self titled album, which came out in 2003, showed an experimental side to the band. Lifestyle changes inspired the release, and marked the departure of their old punk sound.  With Neighborhoods, their inspiration came from their side projects.  Angels And Airwaves-style echoes, delays, and feel good rhythms prevail for most of the new release.

Two songs stand out amongst the 14 tracks on the deluxe version of the album.  “Ghost on the Dance Floor” features a long intro in the style of Angels and Airwaves.  An addictive guitar riff and a ghostly synth sets the mood right off the bat.  Again, not reminiscent of Blink-182, but nonetheless still hooks the listener in.  Then “Hearts All Gone” brings back the fast-paced punk style that more closely sounds like the Blink-182 of long ago.  Mark Hoppus does the lead vocals for the song, and it resembles more of his side project +44.  The “Hearts All Gone Interlude” plays as a smooth transition that leads in to the rest of the song.

All in all, the album tends to lean more towards a tribute to life without Blink-182 and all that the band has been up to since then.  Neighborhoods as a whole, feels to be more like a gimmick for the band. A “Hey we’re back, but we’re not gonna play what you wanted to hear” type of gimmick.  Yes Blink-182 is back, but it ended up being an old name to house their side project styles under.  If this were an Angels And Airwaves, a Boxcar Racer, or a +44 album, it would make sense.  This may have just been a way to consolidate all of their fans into one giant melting pot.  Whether that was their plan or not doesn’t change the overall effect of the album.

Chris Meyers – When Chris Meyers isn’t helping out with writing and conducting interviews with bands, he can be found refusing to giving up his seat to little old ladies on the bus because he’s a jerk. Sometimes.