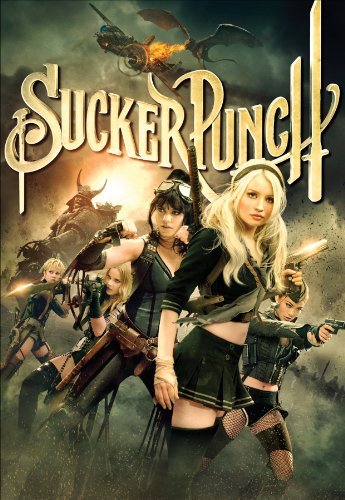 A lot of people are always excited to see what visionary director Zack Snyder is going to do next. He has brought us eye candy like ‘300’ and ‘Watchmen.’ Rather than continue down the graphic novel path, he has decided to tackle an original story that looks as though it could have been ripped straight from the pages of something. This new story is ‘Sucker Punch.’

Babydoll (Emily Browning) is a twenty year old woman who is blamed for the death of her younger system. Her abusive (and guilty) stepfather sends her to an asylum where she is to be lobotomized (thanks to a bribe) which would prevent the truth from ever coming out. The doctor isn’t in though, so the procedure is delayed for a few days.

With all of this time, Babydoll retreats into a sort of imagined world where the asylum appears to be a brothel owned by Blue (Oscar Isaac). All of the girls at the asylum/brothel are forced to be exotic dancers for wealthy clients. Four other girls emerge: Amber (Jamie Chung), Blondie (Vanessa Hudgens), Rocket (Jena Malone) and her older sister, Sweat Pea (Abbie Cornish). While she was previously introduced as Dr. Gorski (Carla Gugino), she is reintroduced as a strict dance instructor. Being new, Babydoll is promised to a fellow known only as the High Roller. She must dance in front of the rest of the class to show where she is at skillwise. As she does this, Babydoll enters a place that looks to be ancient Japan. She encounters a Wise Man (Scott Glenn) who instructs her to collect a map, fire, a knife, a key and a mysterious fifth item. These will aid her escape. Babydoll then does battle with three gargantuan variations on samurai before returning to the dance studio.

Will Babydoll and her new friends escape from their captors? Will she really be lobotomized? Where will the girls end up in the next action scene? What the heck is going on?

‘Sucker Punch’ is a classic example of a film that is style over substance. If you trim away all of the flashy fight sequences and loud, distractions, there isn’t much to the plot at all. A girl gets wrongly thrown into an institution and dreams about escape. Most of what you see on the screen takes place in Babydoll’s head. It kind of takes away any sense of danger because there really shouldn’t be any actual danger, given this fact. On that note, why does she only enter the battle scenarios when she starts dancing?

Most of the action scenes are fun and quite nice to look at, adopting a sort of ‘Matrix’ quality to the physics. If you’re the type to constantly wonder ‘why,’ you probably shouldn’t even bother with the film in the first place. Aside from a few details that prove useful later in the narrative, a lot of what happens just seems to be there because it looks ‘cool.’ For the first fifteen minutes or so, you might swear that you were watching a gorgeous, yet incoherent, music video.

Not to toot my own horn, but reading the above synopsis, or another one online, you are already at an advantage. The film takes its time properly orienting the viewer.

We have seen female empowerment violently brought to the screen before. Tarantino’s ‘Kill Bill’ movies are admired by many and hated by some, but very few people would list it as the director’s best work. This is the same way. Instead of being an homage to old-school martial arts films, this is more a love letter to comic boks and video games. At least ‘Foxy Brown’ took place in the real world.

While the aim may have been questionable, the execution is rather solid. The film is always watchable even if you don’t know what is going on. Attractive actresses destroying robots and steam zombies should and will always find an audience.

Across the board, the acting is only about average. There isn’t much in the way of subtlety and nuance. The dialog and characters read a lot like they came straight out of a good, not great, graphic novel. In fact, there are stretches where there isn’t a lot said. The whole experience is more of a visual journey.

Special features include:a few motion comics about the big action sequences in the film and a look at the soundtrack.

If you don’t mind deceptive narratives and action for no reason other than to make your television light up, check out ‘Sucker Punch.’ Besides the sights and sounds, there isn’t much to get too worked up about.