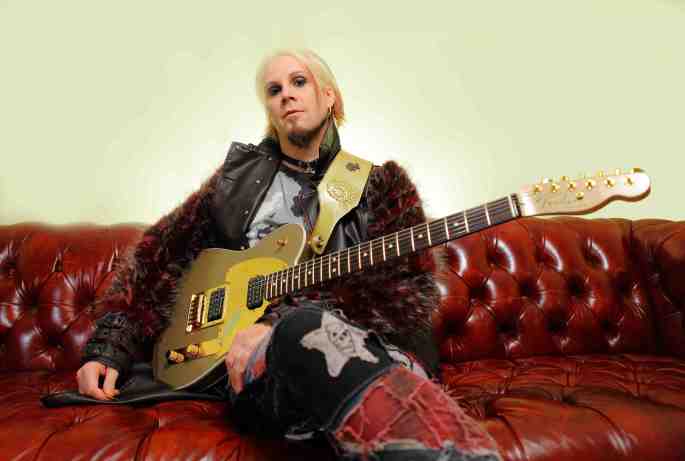 An evening of guitar virtuosity was enough incentive to bring me back to one of the area’s nicest venues  The old timey feel of the Sellersville Theater and the strict seating arrangements lent a feeling of a more focused than usual audience.  Unlike my other time there, the pit area in front of the stage was occupied by tables and stools instead of a standing general admission audience.  The handful of people who stood were along the sides and not necessarily any closer than where I was lucky enough to be.

Indeed, I was in for a show more-so than a sweaty (yet also fun) human avalanche.

The first band up, Dead Girls Academy, represents a second chance for frontman Michael Orlando, formerly Michael Vampire.  The Victory Records band was, in truth, a little better than expected with a lot of sunset strip vibes but also some fairly impressive dual guitar harmonies.  With more seasoning and more adventurous songwriting, they might have potential to grow.

Jared James Nichols was the main support and the biggest surprise of the night as I had absolutely no knowledge or expectations.  They’re a very bluesy 3 piece anchored by Elvis (no, not that one) on bass and Dennis (from Sweden!) on drums, serving as the backbone for the impressive guitar work kind of bluesy singing of their frontman, the titular Mr. Nichols.  There were definitely nods to some classic rock like an Allman Brothers lick here and there.  At one point, someone from the crowd called out “Cat Scratch Fever” (there is a slight Nugenty resemblance) which Jared laughed off.  This kind of tour seems like an ideal opportunity to get this band’s name out there in front of audiences who would appreciate their skills while also being different enough to stand out.

The stage received a facelift for the headliner.  Inflatable Halloween characters adorned the stage, somewhat creating a carnival atmosphere.  During the set, an odd creature would stagger out: robot, clown, etc.  Along with flashing lights and the occasional light-up guitar further spiced things visually but six strings were what brought us out.  Oh, and guitar picks that were handed out to some lucky concertgoers.

Thing started with drummer Logan Miles Nix and bass player Ian Ross warming things up while a killer robot helped set the mood.  Then, John 5 himself came out and the fireworks began, starting with heaviness in the form of “Season of the Witch.”  There were a few nods back into the catalog but a lot of the material drew from his latest full-length ‘Season of the Witch,’ which was fine by me.  The other highlights were the new songs that have slowly rolled out on Youtube from his upcoming album.  Newbies “Zoinks,” “Crank It” and…one more that I’ll mention further down in this review, all held up extremely well live and bodes well for the album as a whole.

Those who either were in attendance last time or heard the live album (this is the venue it was recorded at) may recall he did a medley toward the end.  This year, the band had a brand new slew of songs:

Rush “Fly by Night,” Nirvana “Smells Like Teen Spirits,” The Knack “My Sharona,” The Police “Every Breath You Take,” Rob Zombie “Thunderkiss ’65,” Marilyn Manson “The Beautiful People,”  Van Halen, some Metallica and Megadeth, Rage Against The Machine, Led Zeppelin, Black Sabbath, Soundgarden, Pantera, really, too many to list.  There was also some Steve Vai-esque talking through the guitar.  At various points throughout the evening, a few mini guitars were employed along with a banjo, all making brief appearances.

As has been customary, Michael Jackson’s “Beat It” had a prominent place in the set before John wandered out into the crowd for some soloing.  At one point, late in the set, a young fan from the audience was even brought up on stage to tentatively strum on John’s guitar while Mr. 5 manipulated his pedal board to make some sounds.

Things ended with ‘I Am John 5,” a bold choice as it’s a new song but I certainly doubt that anyone left disappointed, as it had an inherent funkiness, speed and excitement to help empty the tank, so to speak.

An encore would have been great but as John said, he had to finish watching “Kiss Meets The Phantom,” something I think we can all respect.

Keep an eye out on www.john-5.com for more announcements, videos and news on that full-length and all happenings. 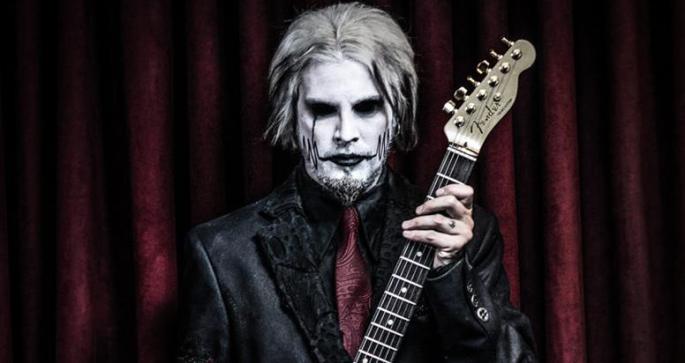 John 5 and The Creatures makes a return to the Sellersville Theater with the ‘Invasion 2019’ tour. If you recall, they were at the theater back in February during the ‘It’s Alive!’ Tour.

JOHN 5 and The Creatures – comprised of world-renowned guitarist JOHN 5, bassist Ian Ross and drummer Logan Miles Nix – are following up on this year’s live album release, It’s Alive!, with a brand new full-length studio album coming in 2019! The new album, entitled Invasion, will be teased on New Year’s Day 2019 by way of a brand new music video for the new track “Zoinks!”, inspired by Scooby-Doo! Directed by Matt Zane with animation from Disney animator Brett Broggs (Frozen, Wreck-It Ralph), the video will also feature the voice acting talents of Nikki Sixx, Susan Olsen (known for her role as Cindy Brady on The Brady Bunch), and Fred Coury. Coury also is credited for scoring the video alongside JOHN 5. The video will be premiered via JOHN 5‘s YouTube channel.

Fans should stay tuned for the video coming on New Year’s Day! The official release date for Invasion will be announced in 2019.

Invasion was produced and mixed by Barry Pointer, and will be released via a series of music videos, just as JOHN 5 released his 2017 studio album, Season of the Witch.

In celebration of the upcoming album, JOHN 5 and The Creatures will kick off the second leg of his North American Invasion Tour on February 23, 2019 in Las Vegas, NV. The tour will feature support from blues-rock guitarist Jared James Nichols.

JOHN 5 says, “Get ready for the Invasion tour! I will be playing some songs from my new record, Invasion, a brand new medley, and much more. I’m really excited to have Jared James Nichols out with us. This tour is something you’re not going to want to miss!”

Jared James Nichols adds, “As a young budding guitarist, I grew up with a Guitar World cut out picture of JOHN 5 on my bedroom wall. He was always one of my ‘Guitar heroes’. He is the total package… insane technique, amazing musicality, with a style and look all of his own. Needless to say, when I got the call for this tour, my jaw dropped. I’m absolutely honored to warm up the stage for him every night across America and Canada. I’m getting my chops ready to tear it up!”

See below for all confirmed tour dates. Tickets are available now via individual venues, and VIP packages will be available soon exclusively via www.john-5.com/store.

About JOHN 5:
JOHN 5 has worked with a varied range of artists, performing as guitarist for some of the biggest headlining rock bands in the world such as Rob Zombie and Marilyn Manson, as well as playing session with Paul Stanley, Rod Stewart, Lynyrd Skynyrd and more. Slash has called JOHN 5, “one of the most mind-blowing guitarists around” and Rob Zombie has dubbed him “a fucking shredder”. JOHN 5 has released seven solo albums to date, as well as a remix album, and has written music for the likes of Avril Lavigne, Garbage, Ricky Martin and others.